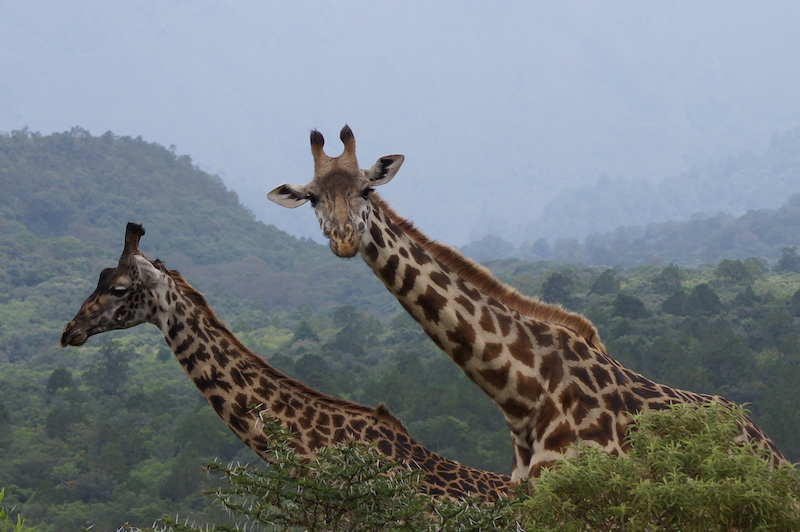 The Arusha National Park is the closest park to Arusha Town, the Tanzanian safari capital.

It’s a very small park in comparison with the others in Tanzania and there are fewer animals.

But it’s the only place in the North where you can easily see the Black-and-White Colobus Monkey.

There are 3 different parts of the Arusha National Park: the spectacular Ngurdoto Crater with rocky cliffs, the Momela Lakes with thousands of Flamingos and other kinds of birds, and the Mount Meru, the fifth highest in Africa at 4566 m.

The common animals that you can see are: Masaai Giraffes, few Elephants, Hippotamuses, Buffalos, Black-and-White Colobus Monkeys, Baboons, Blue or Green Vervet Monkeys and around 40 different kinds of birds. There is no Lion, neither Rhinoceros nor Wildebeests.

The best moment to go to this park is from December to February.

Arusha Town is the step city of the North where most of the travelers pass before going on safari.

It’s located 55 km from the International Kilimanjaro Airport and situated at the foot of the Mount Meru, the fifth highest in Africa at 4566 m and the second summit in Tanzania after the Mount Kilimanjaro at 5895 m.

In the past it was a quiet and friendly town with young trees on the roadside. Today it’s a regional capital with a growing population.

Arusha has no great historical or architectural interest.